Shaun Pollock hit the winning runs against the West Indies, just as he had in front of his adoring home fans in Durban two days earlier, to bring to an end the international career of a true legend in cricket.

While South Africa brought up a comfortable 8 wicket win in a rain affected match, a result that gave them a 5-0 white wash series victory over the touring Caribbean team, the series will be fondly remembered for the exceptional send off each of the 5 cities gave one of their favorite sons.

While Polly would have always known that the country was behind him, he could never have imagined the fond affection he has managed to evoke in all cricket lovers in South Africa. Every run he scored was cheered with a reception as if he had just brought up his century. He received standing ovations every time he went down to the boundary to field. His last over in each match was greeted with decibel levels that are more common in the enormous stadiums of India then in the smaller grounds in South Africa. Capacity grounds, all stood, clapped, screamed, waved many flags and banners, as they saluted and bayed good bye to their hero. It was certainly lump in the throat and a few tears stuff.

Pollock, ever the gentle man, came out to the middle at the completion of each match and thanked all sections of the crowd, and at each match few left their seats until he had gone back up the stairs to the pavilion.

While Polly was deeply touched and obviously very emotional at the reception he received at all the matches, especially that at his home ground in Durban, it was a send off that was thoroughly deserved by a man who few can disagree, has been a role model both on and off the field.

Shaun Pollock will be missed by all. There’s no doubt that he will be a success at whatever he endeavors to do after cricket, but for now we say goodbye to a world legend. Thanks for the memories. 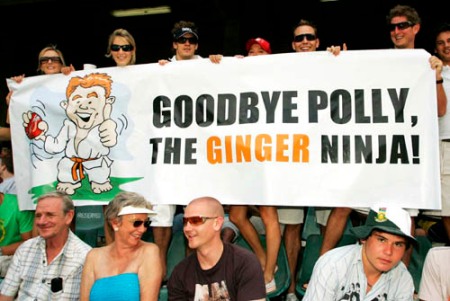 This entry was posted on Monday, February 4th, 2008 at 11:20 and is filed under Cricket, South Africa. You can follow any responses to this entry through the RSS 2.0 feed. You can leave a response, or trackback from your own site.